We are writing to bring to your attention our concern about the continual application of ‘selective justice’ in the Republic of Macedonia and especially about the manner in which two members of our political party Levica, Zdravko Saveski and Vladimir Kunovski, currently under house arrest, have been treated by the courts and the Public Prosecutor’s office. They were suspected of participation in a mob, according to the article 385, Paragraph 1 of the Penal Code, and we believe that the Public Prosecutor’s insistence on them being remanded in custody was disproportionate to the offence of which they were suspected. The court decided on house custody of 8 days, later prolonged to additional 30. Their trial was postponed for ‘lack of expert evidence’, which was duly provided for the court cases of three other suspects accused of the same deed. Their trial is now pending, its date fixed on the 31 of May, but we are worried that it might be postponed again and their house custody prolonged for another 30 days, effectively sentencing them without trial and limiting their freedom of movement for political reasons, rather than legal.

For this reason, we would like to ask you to show interest and act in response to the possibility of their house custody being prolonged again and to support us in our demands for fair trial.

We hope the bitter irony of the situation is obvious. Not only are the political elite and the members of important state institutions pardoned en masse and without trial for crimes much more substantial than the aforementioned, but also the very protesters against such unconstitutional decision are ‘punished’ disproportionately to their alleged offences.

The Central Committee of Levica 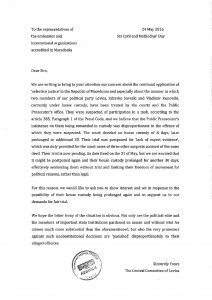