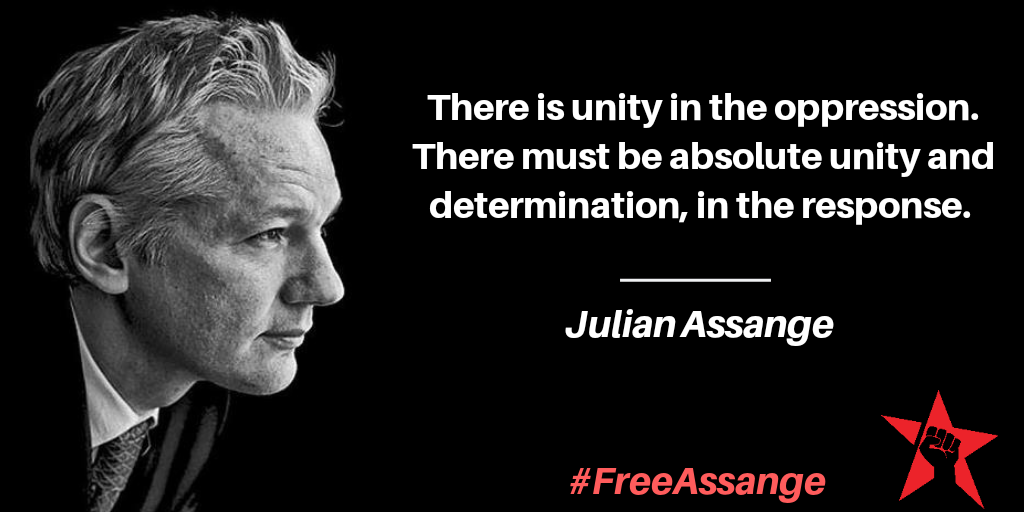 I accuse
The court for covering up crimes on orders.
As for the people I am accusing, to me they are mere entities,
agents of harm to society.
The action I am taking is no more than a radical measure
to hasten the explosion of truth and justice.

The overall situation with justice and freedom, as well as the treatment of these two historical categories by the political establishment, is summarised in the deplorable treatment of the founder of Wikileaks, Julian Assange. The case of Assange demonstrates that within the imperialist order, the rule of law is a simple farce as well as a lie used as an excuse for committing injustice and limiting freedom.

Assange plainly revealed the truth and the motif of the western imperialist powers, headed by the US and NATO, in their military campaigns and violence waged across the world in the name of “human rights and democracy”. To the ordinary man Wikileaks showed the indisputable truth about the so-called “humanitarian” actions of their governments, executed by force and without legitimacy across other countries worldwide.

Assange is truly one of the most important, if not THE most important journalist of our time. The main charge against him is not the so-called act of “espionage”, but in fact he is accused of revealing war crimes.

For his prosecutors, Assange’s crime is that he exposed in broad daylight, in front of the eyes of the world public, the american war crimes which have cost tens of thousands of lives in Iraq and Afghanistan, as well as the diplomatic intrigues which have caused indescribable suffering around the world. Instead of trying war criminals such as Blair, Bush and Cheney, Assange is being tried for bringing their crimes to light.

Wikileaks and Assange have provided us with a shield of truth about the wars, as well as the goals of the violent and irresponsible political power. Standing up in their defense, we are defending the courage to stand up to the many years of imperialist practice of violence and manipulation with the goal of covering up the truth. It is exactly the political persecution of Assange which exposes the alignment and compatibility of the two, only superficially opposed, political wings of the establishment in the United States – the Democratic and Republican parties. To them, the imperialist interests of the US Government are not only above the law, the international order, justice and freedom, they are also carried out to the direct detriment of other countries and regions and have dire consequences for the daily lives of the peoples living there.

Because of this sin, Assange is now politically persecuted and faced with a prison sentence of 175 years.

Levica joins the global protest against the persecution of Assange. With that in mind, we call on all oppressed nations and people to stand in his defense and to exert pressure for his release. Assange’s struggle is a struggle against the capitalist oppressors, which push the people in wars which bring profit to the ruling classes. This struggle cannot be separated from the struggle of national liberation of the people across the world which are constantly pressed under the imperialist boot of the US and NATO.